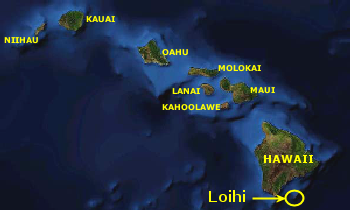 Further southeast of Hawaii the hotspot is already working furiously at his next volcanic island. It still lies about 3000 feet below sea level and has already been named: Loihi.

Unlike the new island Loihi, the Hawaiian Islands keep becoming smaller and flatter as we move northwest. First, erosion and weathering had more time to gnaw at the island's surface and second lava keeps becoming more solid and thus heavier through the years, which lets the islands sink slowly.